Forget about lions and lambs, we’re welcoming March in with a whole lot of l-o-v-e! Today, we are thrilled to announce our couple of the month, Melissa and Brad. We absolutely loved getting to know this couple as they choose their forever rings and we know that you will, too. The love that they have for one another is truly contagious to everyone they meet. Congratulations, Melissa and Brad! 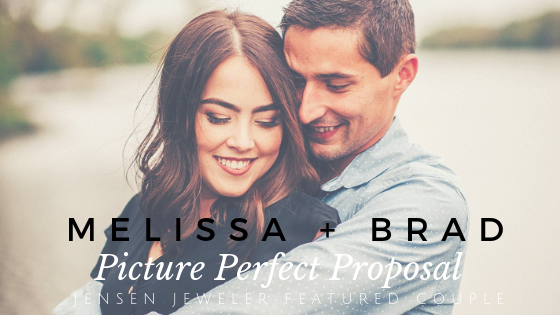 Melissa grew up horseback riding at a farm in Holly, named Foxwoode Hunt Club, that her family owns. Because this barn holds such a special place in her heart, it was the perfect place for Brad to pop the big question.

To make the proposal flawless, Brad enlisted the help of Melissa’s sister, Meredith, and her horseback riding trainer, Nerice.

Nerice had sent Melissa a text asking if I would like to come home on Cinco De Mayo to ride and for a Kentucky Derby Party, two of Melissa’s favorite things. This also happened to be the weekend after her birthday, so it seemed like the perfect birthday plans. And so it was arranged that Melissa and Brad would be at Foxwoode Hunt Club for the first weekend in May.

Now, fast forward to May 5, 2018. Melissa woke up at her mom’s house, threw on her breeches, and tossed her hair up in a bun. That morning, Brad kept asking if she was going to shower that morning, which she thought was strange. But as she explained, it didn’t make sense to get ready in the morning when she was “just gonna go get some dirt under my nails at the farm!”

When the two got to the barn, Brad had asked if she wanted to go over to the gazebo to take their new fantasy football picture (Melissa told us, “For those that know us, this is a totally normal thing. For those that don’t, we take our fantasy football team pretty seriously and love to get a new picture every year.”)

But, Melissa was eager to ride, so she insisted they take the pictures later that afternoon.

Melissa told us that,

“This is when things started to get weird. Brad kept asking me if I wanted to fix my hair for our FFB picture! I had just gotten off of a horse, so I said no, not thinking anything of it. Who needs fancy hair for a fantasy football picture anyways, right? Wrong!!”

Then, after grazing the horse Melissa rode that day, Brad asked to take their Fantasy Football picture again, and again there was more that Melissa wanted to do before taking the picture. After all, Melissa had planned to take Brad on a walk around the property to show him all of the stunning views at Foxwoode. Little did she know that a proposal was eagerly awaiting her attention!

When the couple finally made their way around Foxwoode and it was decided they would take their Fantasy Football pictures, Brad offered Melissa one final chance to fix my hair, which she, of course, shrugged off.

They took a set of pictures in front of the pastures, staring at the most beautiful view of rolling hills, and then Brad decided it was time to go to the gazebo. Once there, her sister, Meredith, took their phone to take a new “Fantasy Football Picture” 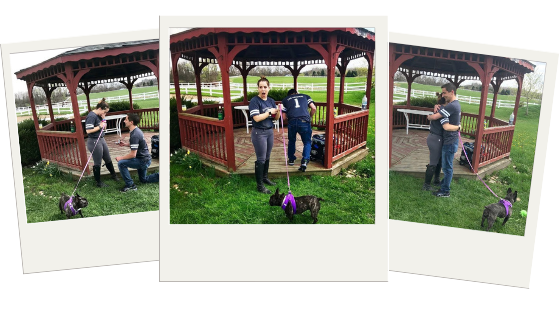 With Melissa and Brad positioned in front of the gazebo, Brad stopped and said “Have I told you how much I love you lately?” For the first time that day, Melissa stood still as a statue, watching Brad take out the engagement ring. Brad continued to tell Melissa how much he loved her, then asked if she had remembered him telling her that he planned to marry me all those years ago? Then, in her favorite place in the world, in front of their dog, Levi, her sister, and a few close friends, Brad got down on one knee and asked Melissa to spend forever together.

I could not say, “yes,” fast enough. It was better than I could have ever imagined. It was the perfect day, surrounded by the perfect people, at a place so special to me. I am so excited to become Brad’s wife next August.”

Did You Know He Purchased the Ring from Jensen?

“Brad and I went to Jensen Jewelers to shop together in February before he proposed. I had never tried on rings or knew my ring size, so we both wanted to get an idea of what I liked. This was the only store we shopped at, as it was the store I heard had the best customer service AND the best quality engagement rings. Brad and I picked out 3 favorites together, and he surprised me with the one he picked. I had no idea that Brad purchased the ring! Brad was so good at playing it off like he hadn’t, and I found out he placed the order an hour after we left the store!”

What Did You Think of Your Service? 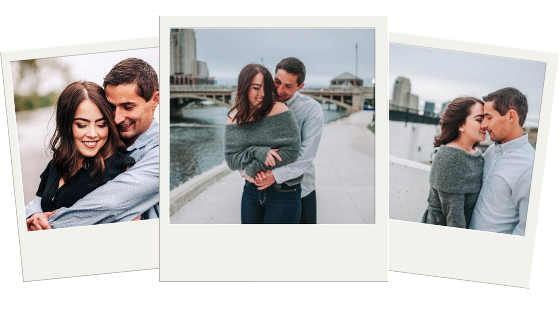 It’s essential to us that every engaged couple leaves our store feeling excited about their engagement ring purchase and ready for the next steps ahead of them. That’s why we always like to ask about their experience with us.

This is what Brad had to say about his experience at Jensen Jeweler,

“I would say the experience at the store was great. The store wasn’t overwhelming and Bonnie met us at the door to help right away which was awesome. Melissa was able to get measured for a ring within the first few minutes of us being there and we were able to start looking at settings right after. I loved how friendly and helpful the staff was because we both had never shopped for anything like this before. I also purchased the diamond at Jensen. I was very impressed with the explanation of how different sizes and clarities would look with the setting that Melissa and I had picked out. Before going to Jensen, I had no knowledge of diamonds so the information was very helpful and helped me make the best decision. I am so happy with the ring that we picked out from Jensen, I would recommend Jensen to everyone!” 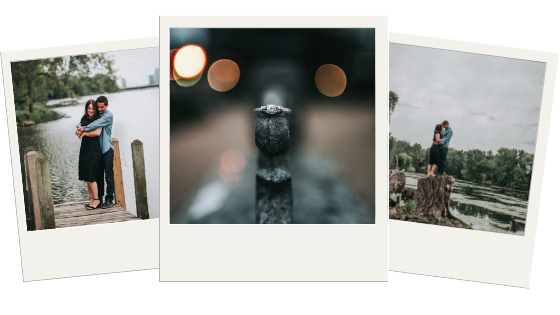 Again, congratulations Melissa and Brad! And thank you for sharing your beautiful love story with us!
(Photo Credit: The Focused Soul by Jenni Hetch)

« Spring Break Must-Haves!
How to Get Your Dream Ring Without Ruining His Surprise Proposal »